Tim Coates has always been musically and mechanically inclined.  Even at a young age he was the boy on the block who fixed other's bicycles.  Tim started taking piano lessons from his mother at age 5, studying horn with retired Illinois Wesleyan brass professor Austin Edwards at age 10 and teaching himself guitar at age 13.  All the while he was still fixing whatever was broken.

By the time he was a high school senior in Mitchell, SD Tim was arranging music for the school swing choir while active in his other musical endeavors.  And his VW bug needed his constant tinkering.  That out-of-tune home piano bothered him enough that he tuned it without instruction.  Three years as a member of The South Dakota All State Band led him to Augustana College playing horn.

During his early years in college he played in the South Dakota Symphony, but realized his heart was really in vocal music and he joined the concert choir.  It was at this time he started a mentorship with Sam Muyskens learning piano tuning and repairs.  He studied voice with Dr. Monty Barnard who recognized Tim's excitement over pianos.  Monty and Tim are still friends and Tim tunes his home piano.  Having become a quite good coffee house performer he appeared regularly at various venues his senior year and won the Augustana College Folk Music Contest in 1975.  After graduation Tim joined the Rocky Mountain Oyster Band and toured often for the South Dakota Touring Arts Program.  A week performing at the 1982 World's Fair is still fondly remembered as the band performed many original songs by Tim and the band.  Tim was named Best Musician of Sioux Falls in 1992 by the Argus Leader newspaper for his work with the three concerts he promoted and participated in.

During Tim's early college years he realized the out-of-tune home piano had really piqued his interest in the complicated mechanical aspect of the piano.  In 1971 Tim began his study of repairing and tuning the piano.  After being mentored by Sam Muyskens for 2 years, starting in 1978 Tim worked 5 years for Aspen Music Festival head piano technician Bob Schoppert.  Working for Mr. Schoppert introduced him to important life long friends who still share knowledge with each other.  He became a Registered Piano Technician in the Piano Technicians Guild in 1978 and was active with the beginnings of online communications with the Guild.  Tim started his own piano service company in 1983.  Through the internet Tim made contacts that brought him new techniques and friends all over the world.  Tim has developed tools and techniques he teaches to others and enjoys expanding his knowledge every day.  As the exclusive provider of piano service for the Washington Pavilion in Sioux Falls since it opened in 1999, the University of South Dakota since 1983, and the University of Sioux Falls for 34 years he is privileged to work for many talented pianists.  Tim is still also privileged to be the highlight of a young piano student's day who has hurried home from school to meet the piano tuner and play a freshly tuned piano. 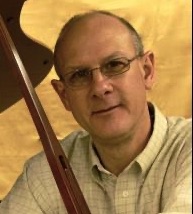